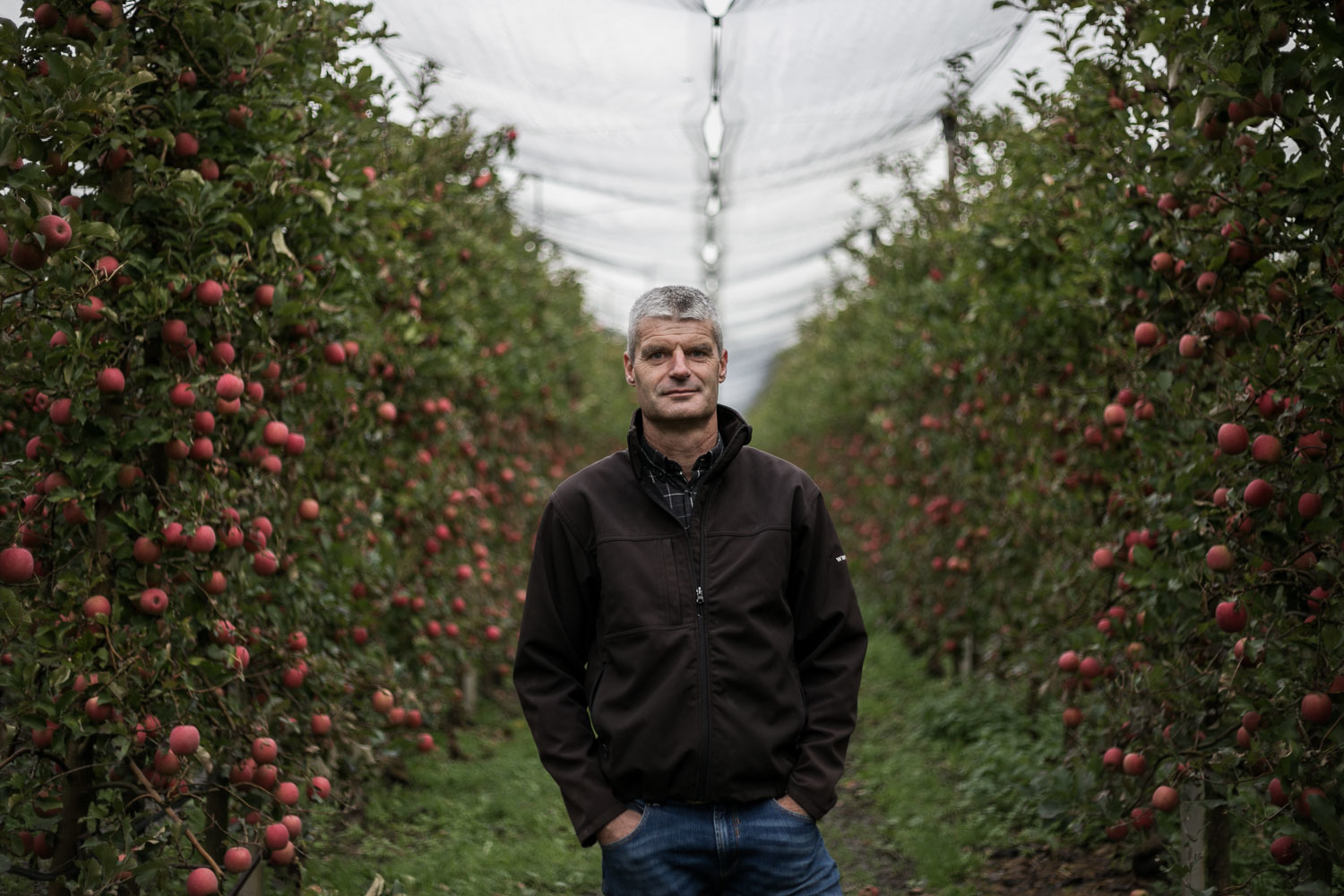 Acting with foresight and working together across generations. With this philosophy, the Stürz family manages their farm biodynamically.

One thing was clear to Hansjörg Stürz at an early age, "I'm going to be a farmer”. Straight after graduating from the Laimburg agricultural college, he started working in apple orchards and vineyards. Unexpectedly, he was offered the chance to become a professional firefighter. And he took it.

However, as a side-line he continues to run the farm. Only possible because his wife Anita (in addition to her own job) lends a hand on the farm and his parents also help out. With so much work, Hansjörg and Anita have little free time, and there are no half measures with these two. In 2005 Hansjörg learns that a colleague works biodynamically. Inspired, he tries his hand at biodynamic viticulture. A short while later, the Stürz family is farming the entire farm biodynamically.

The change is not easy, but then change never is, and Hansjörg is no stranger to doubt during this time. The pressure not to make a mistake is huge in organic farming. It’s important to have the foresight to promote the balance of nature, strengthening plants and soil. And if there’s a problem, the regulations of the Bioland and Demeter associations only allow treatments with ingredients that also occur in nature. 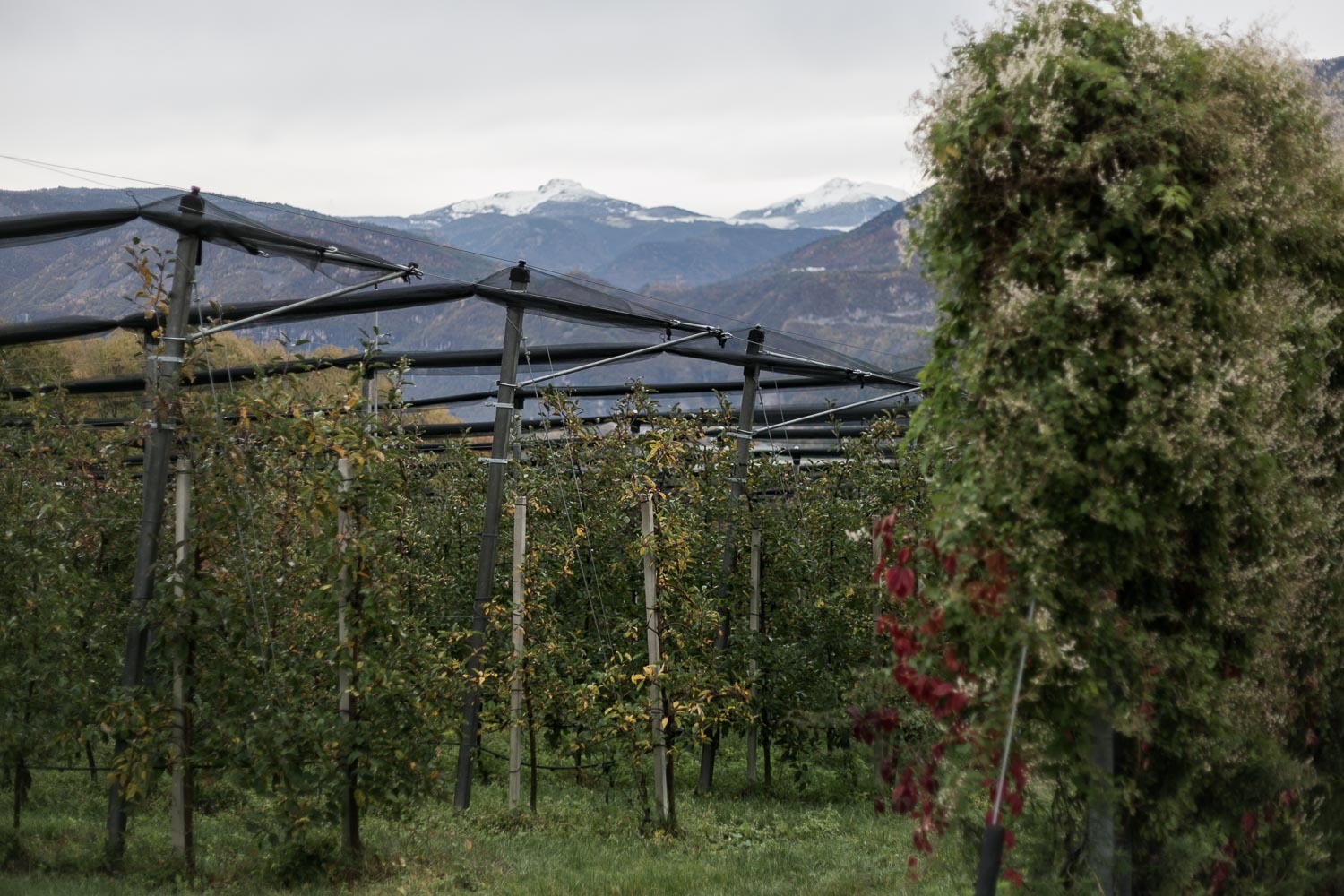 Hansjörg relies on biodynamic preparations made from herbs, minerals and cow dung. He prepares compost preparations from yarrow, chamomile, stinging nettle, oak bark, dandelion and valerian together with farmers of the Working Community for Biodynamic Agriculture group. The compost preparations promote the transition of manure into compost and activates soil life. Totally dedicated he composts himself and spreads it in the meadows during spring. 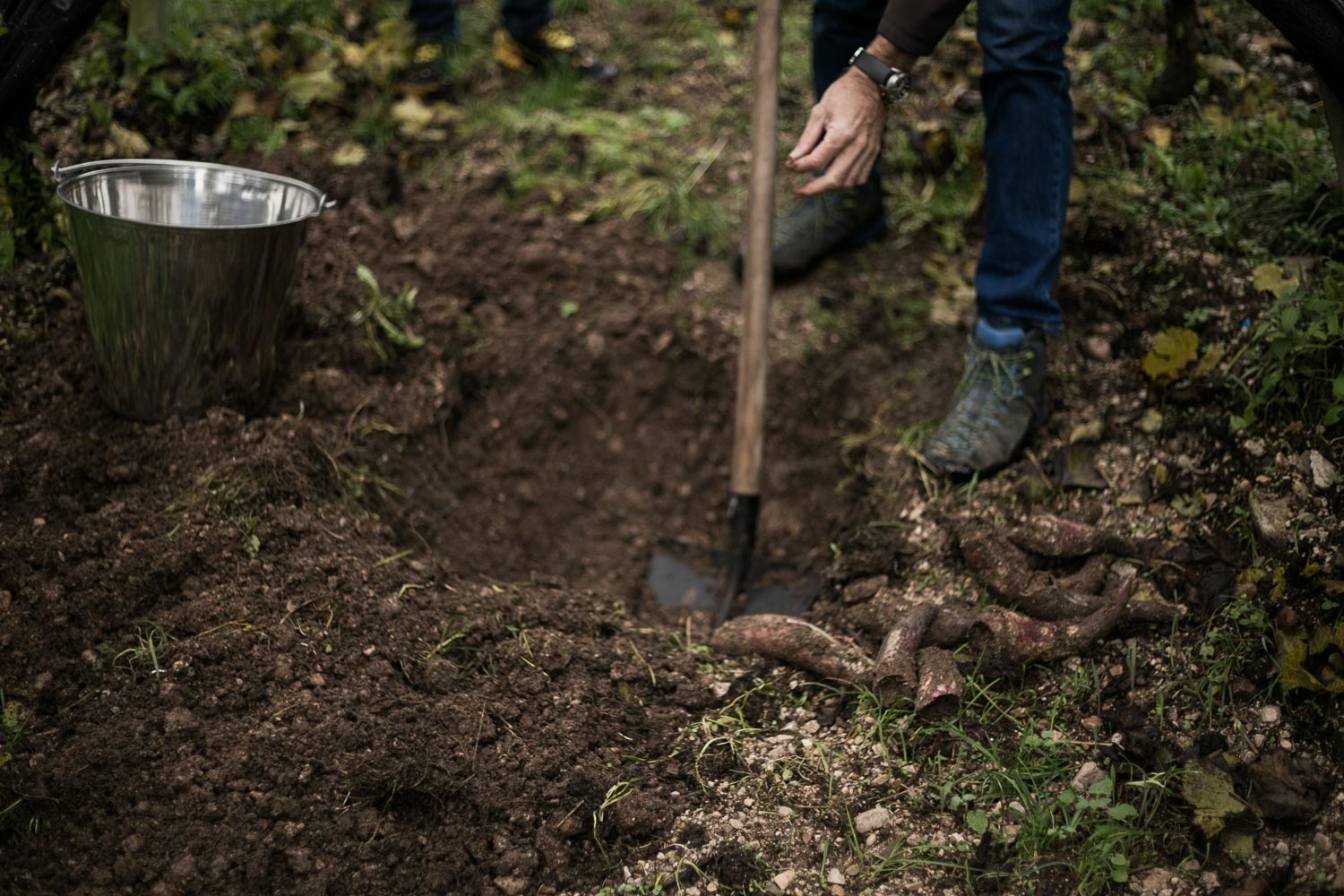 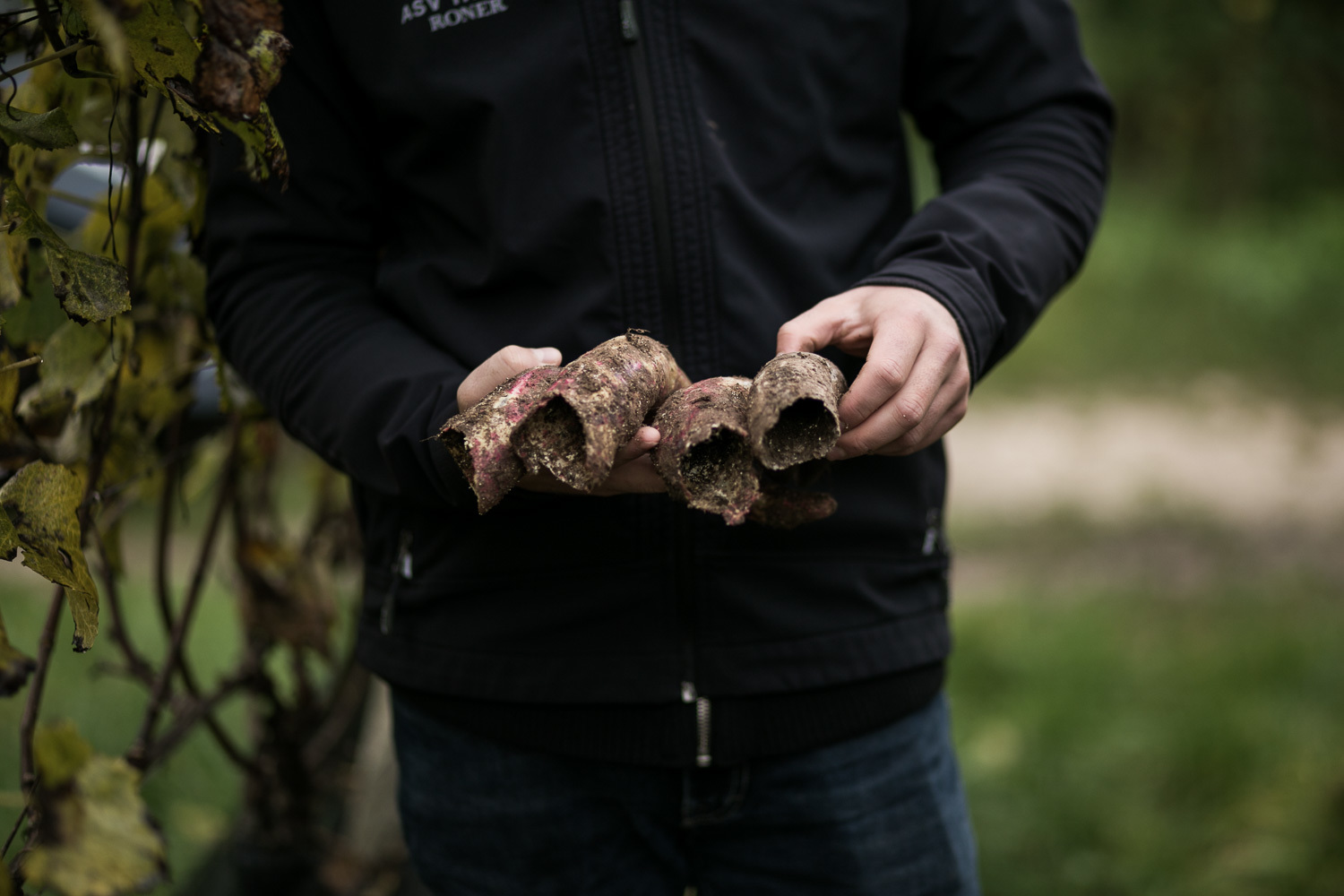 Hansjörg digs the horns out and places them into a steel bucket. In it he brings the spray preparations to the farm and treats the horns. To do this, the family mixes the preparations with water in a huge copper kettle for an hour. As a family business, the Stürz have the time to treat by hand – never by machine. In this way, each family member brings their own unique personality into these dynamic ‘soil boosters’.

Slowly, each circle in the copper kettle that’s made with a broom of hazelnut and ash picks up speed and becomes faster and faster until a whirlpool reveals the bottom of the kettle. At that moment, the broom switches to the opposite direction. Chaos comes and quickly disappears, a constant rise and fall, like life itself. 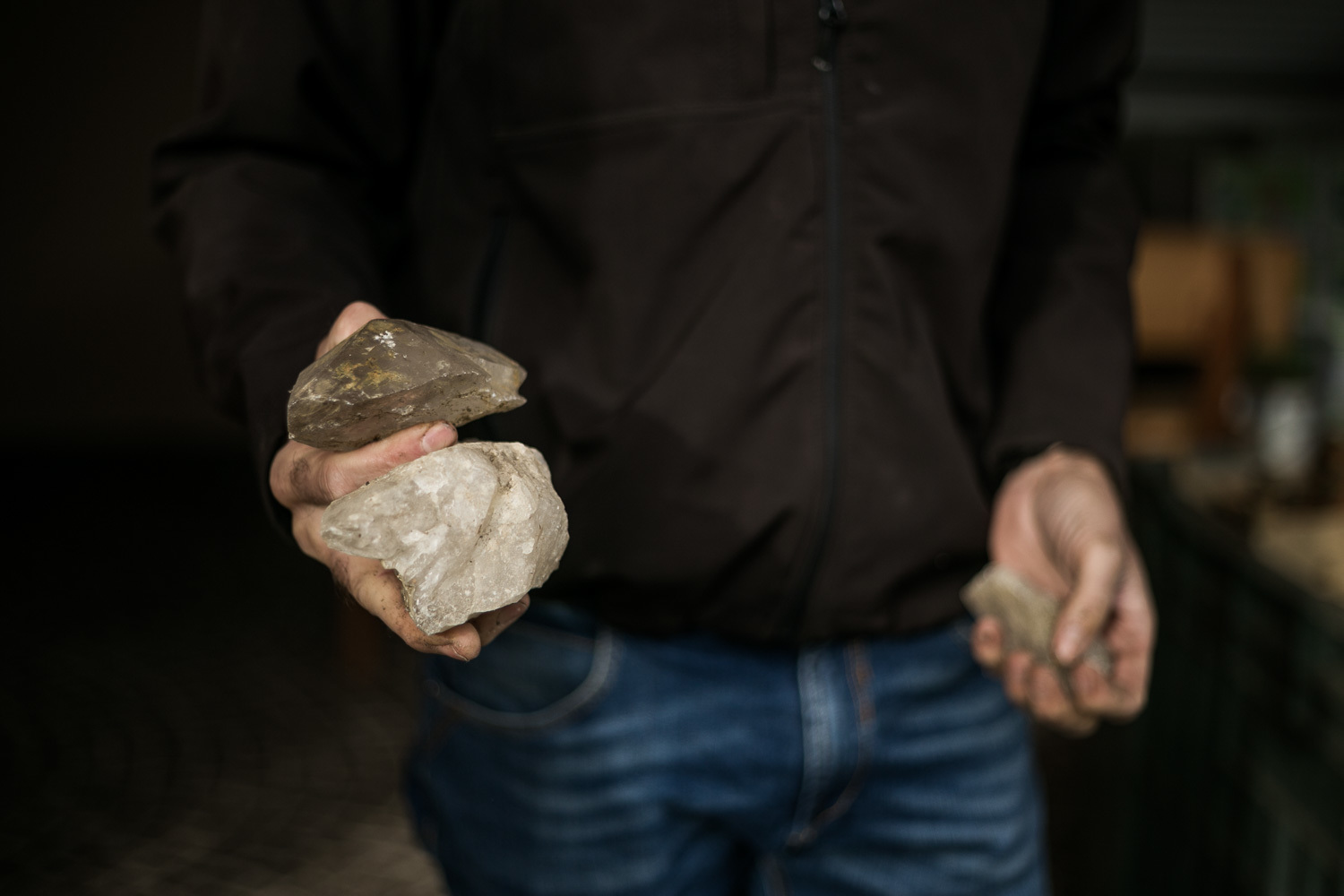 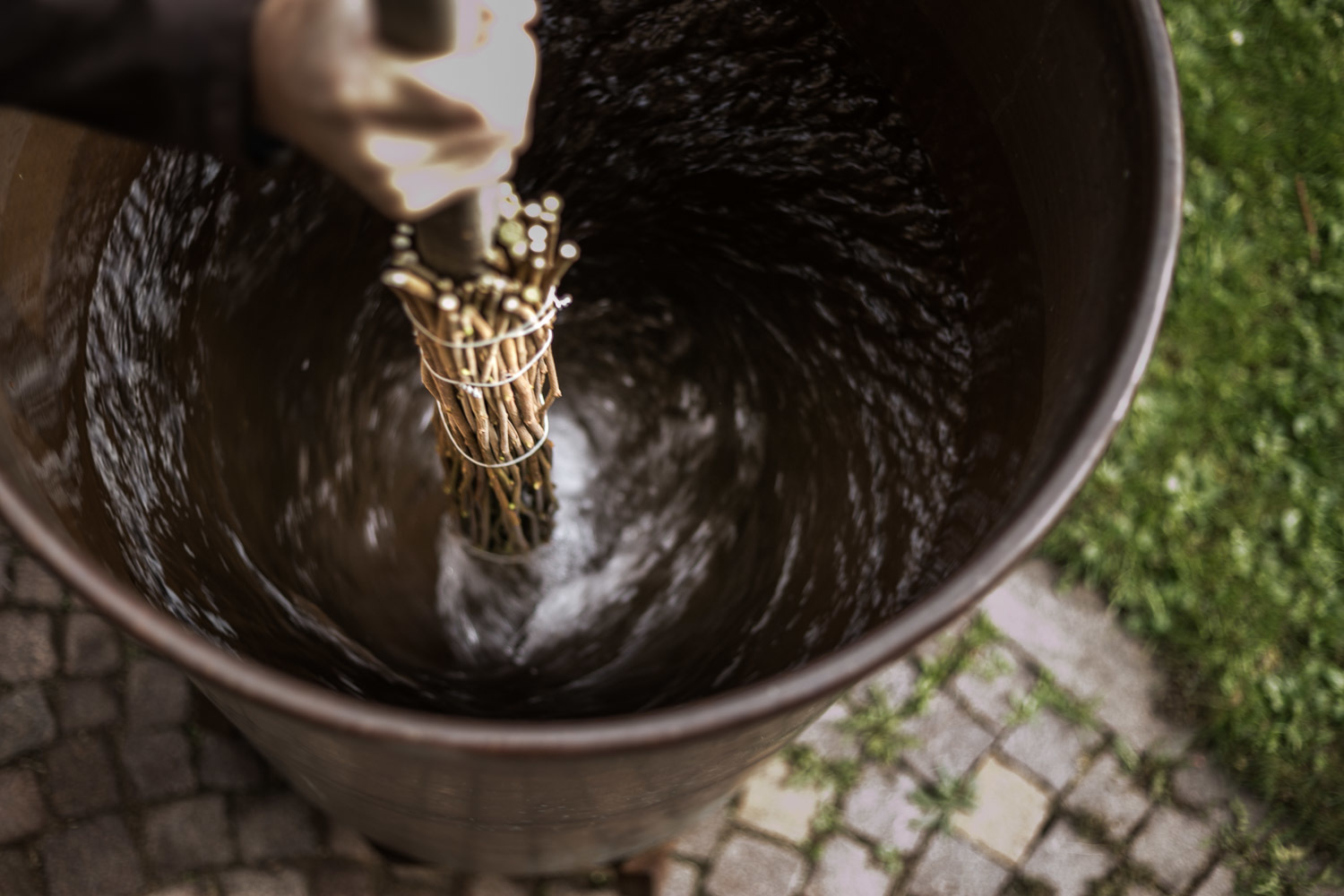 Glass jars (never plastic) are filled with the preparations and horn manure is stored in the preparation box filled with peat. Protected from external influence, they wait to be placed back into the soil and the circle of life. Hansjörg stores the horn silica jars on the balcony, so the sun can charge them with energy – like a battery of nature.

Two to three times in spring, Hansjörg applies horn manure with a special sprayer, it promotes root growth and activates the soil. From June to two weeks before harvest, he sprays horn silica. In this way he brings light into the apple orchards and strengthens the plants' resistance to pests. In addition to helpful insects, Hansjörg also provides a home for old chicken breeds in his apple orchards. He built a spacious wooden coop for them in the middle of the apple trees. They peck at worms in the rows of apple trees, and enjoy the freedom. 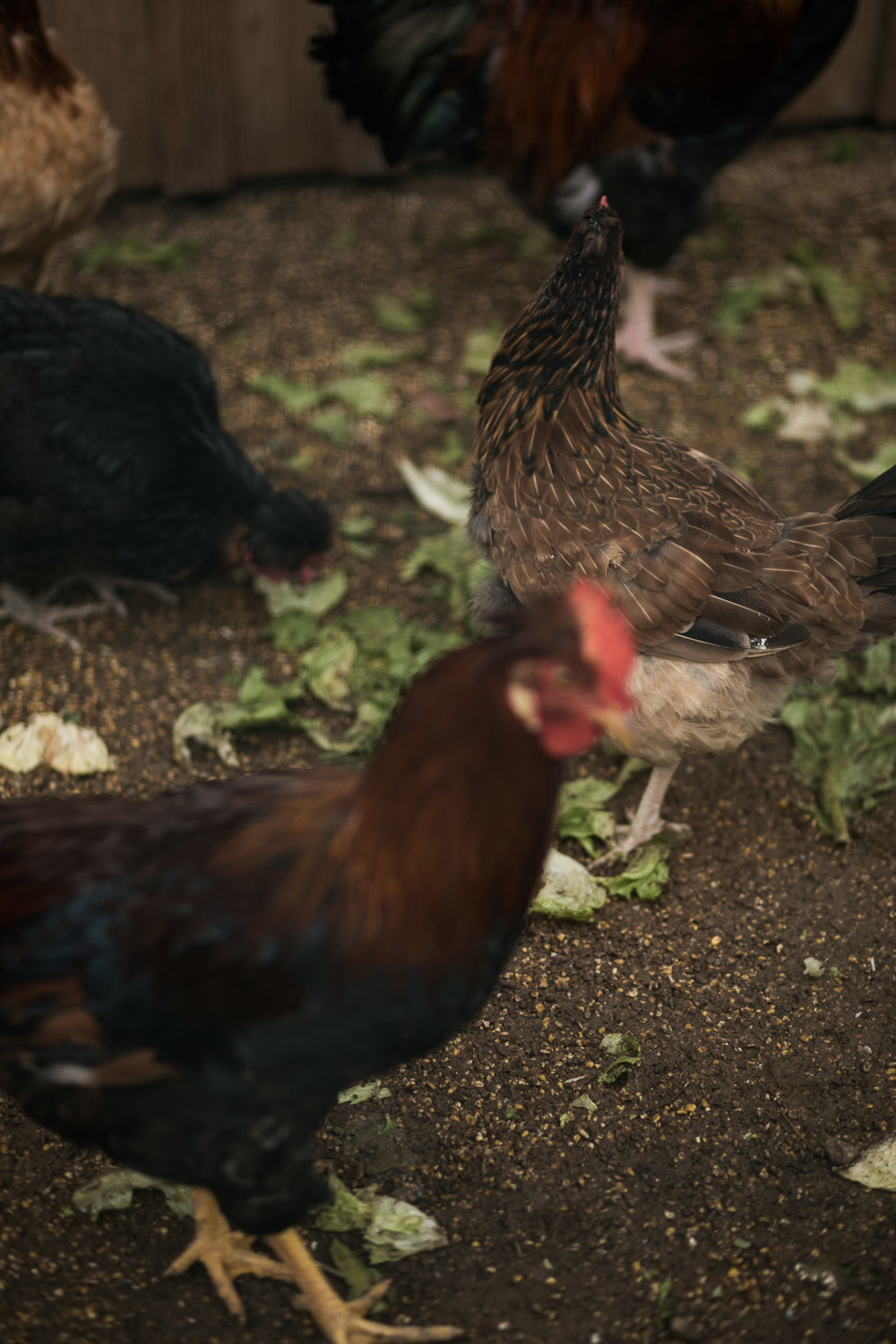 "The spiritual dimension of biodynamic farming inspires us and gives our activities additional meaning." Hansjörg Stürz.

"I like the organic cultivation and biodynamic cultivation has even more gears for me. The spiritual dimension adds something extra, which suits our family." Because it’s hard to explain, Hansjörg's parents are not overly enthusiastic. Nevertheless, they lend a hand and are delighted to see how the meadows develop. The results speak volumes and help them find a way into biodynamic farming.

"The exciting and at the same time nerve-racking thing is that every year is different," says Anita. The days with wet leaves in the apple meadows have doubled in the last ten years. Fungi love moisture and waterlogging and they’re critical for organic cultivation. This makes plant protection a constant task from spring to harvest. 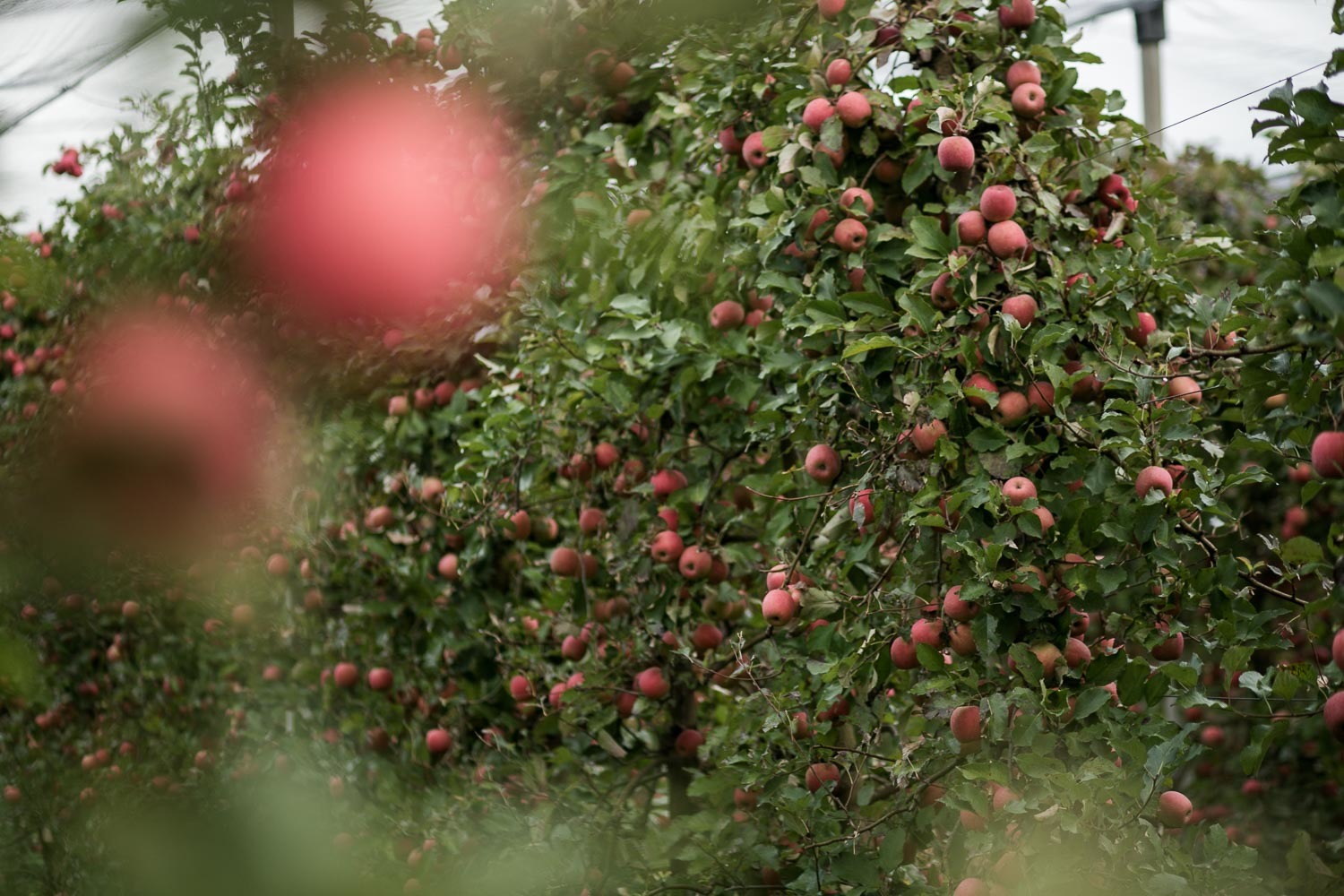 The Stürz family's demand for quality requires a lot of work, which is further increased by climate change. It is good that, in addition to Hansjörg, Anita and their parents, the third generation is also working, in their son Maximilian. In the winter season, the trained chef stands behind the cooker, the rest of the year he has both feet in the meadow. Anita "The young impetus is good for the farm, Maximilian is a thoroughbred farmer". Maximilian laughs "At least since I've been allowed to drive a tractor."

On most farms in South Tyrol, one or two family members work full-time on the farm. Anita, Maximilian, Hansjörg and his parents show how, with real vision and the sacrifice of free time, a family farm can succeed differently. They give commitment, calm and sensitivity to every apple and every grape, with an eye for the smallest details. A sip of wine or a bite into an apple shows that this way of farming flourishes, even as the second jobs of the three. 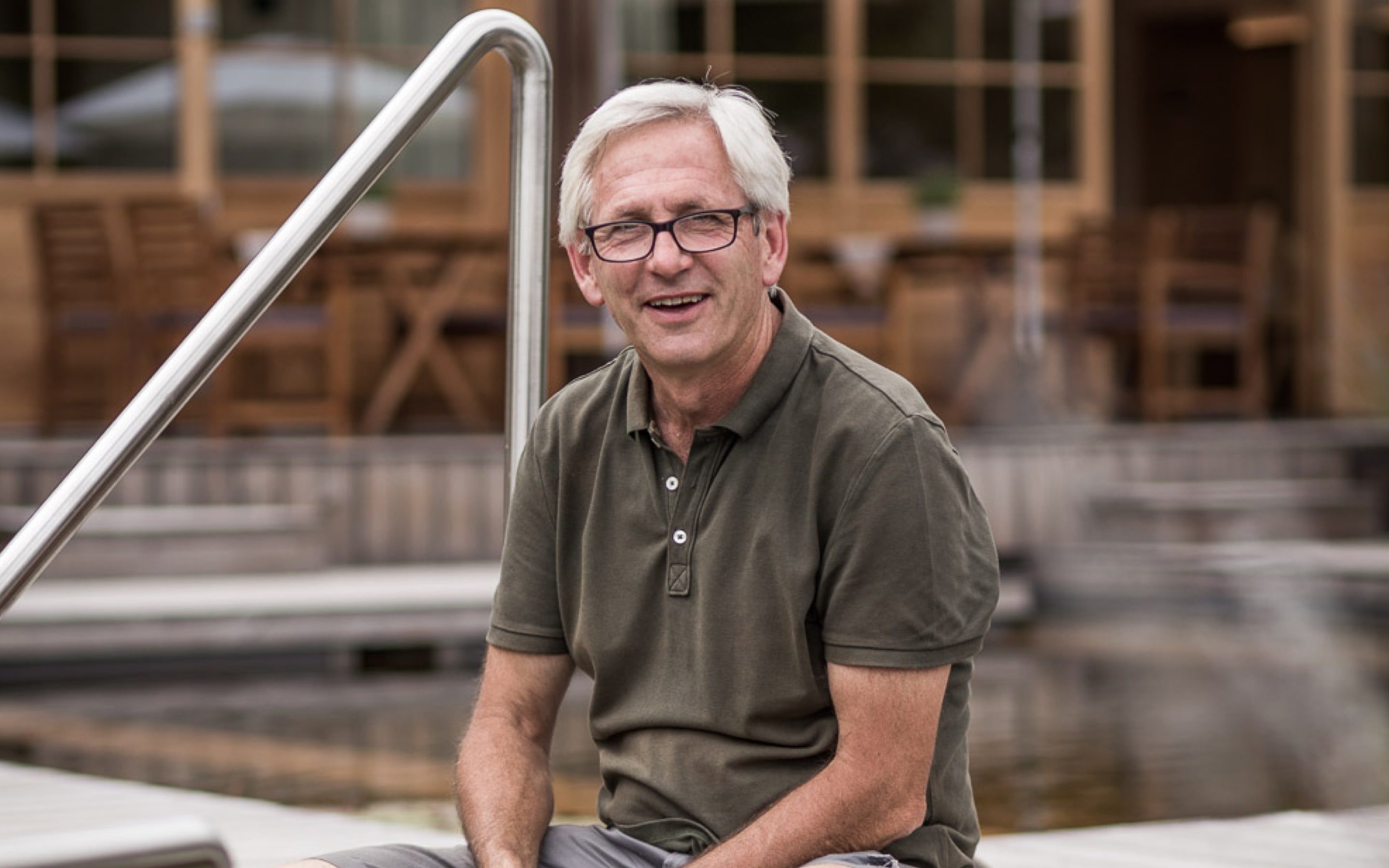 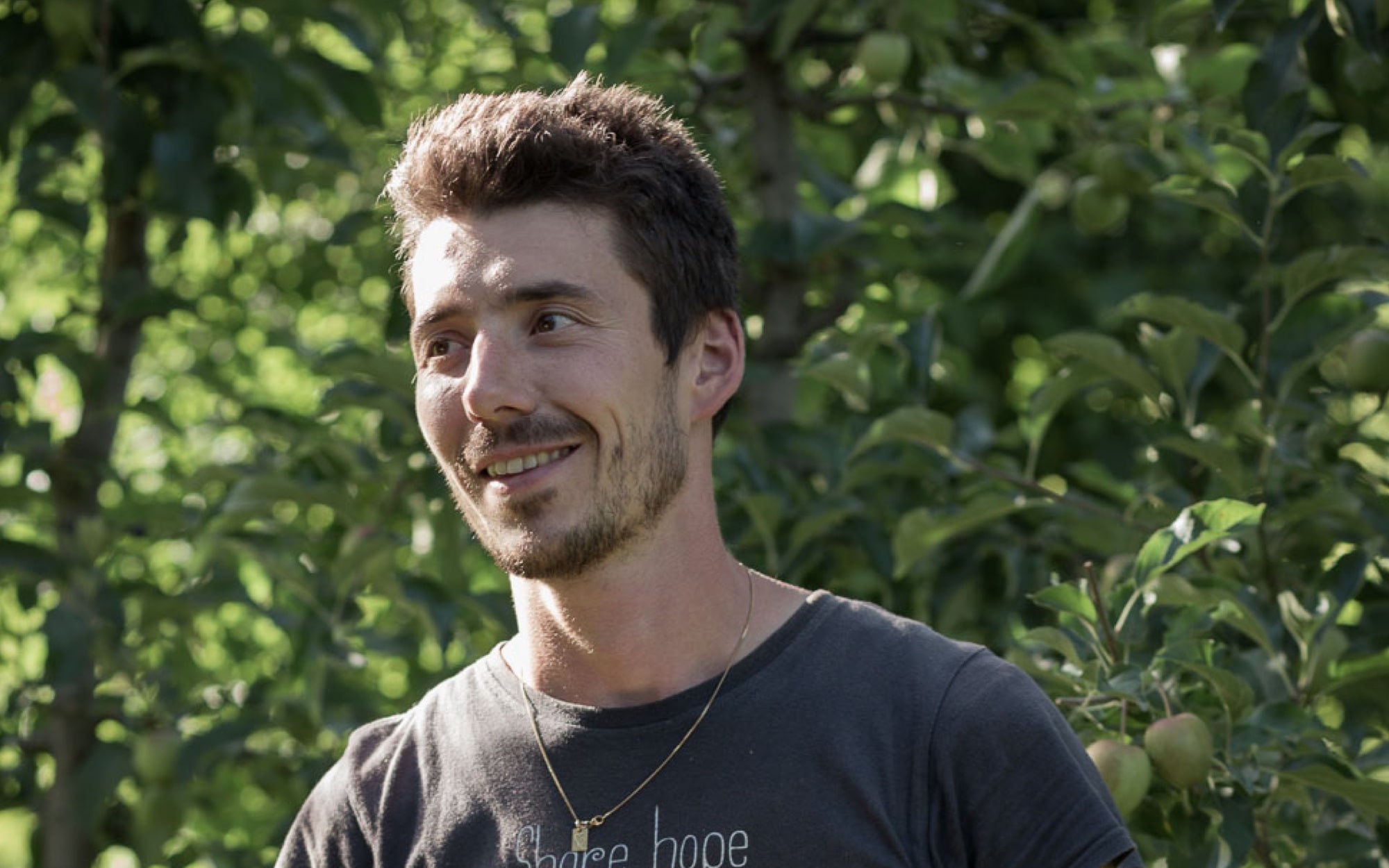